I've created a small project called TinyPubSub that only does one thing at the moment. It's made especially for use with MVVM and Xamarin Forms.

DISCLAIMER: This is a very early version of the library.

I'm a big fan of vanilla MVVM. That means that I don't like to add other frameworks on top of what's already possible to achieve using only Xamarin Forms.

A very common scenario is that I have a main page that are supposed to display some kind of data, let's say a list of ducks. I then navigate down a couple of pages in the app and find a page where I can add a duck. This should then update the first page. I could do this update in the OnAppearing event of the page but that breaks two nice rules of mine:
So I created a small (tiny one might call it) library that solves this in the most simple way I can think of. It also handles dereferencing in a nice way. As long as you don't use Navigation.PopToRoot(); for the time being.

This is the structure of the project in the sample supplied with the source code (available at github). 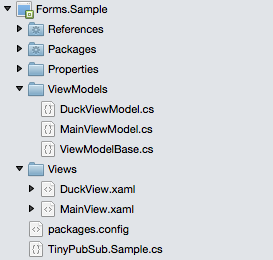 To initialize TinyPubSubs automatic dereference magic, just add this code to each NavigationPage you create. I'm looking at creating a forms library that adds an Init-method instead. But for now, do this.

Usage in the ViewModels

In the constructor of the ViewModels, add subscriptions like this

The "update-ducks" string is just a arbitrary name and you can select what ever you want. Note that I don't pass any data (yet), but that might be the next step in destroying this library by bloating it.

In another ViewModel we then decide to add a duck.

This will fire the actions (synchronous at the moment) and then pop this view. The cool part is that when we pop the view, the subscriptions will be unsubscribed (remember the code in the beginning of the post) and the memory will be cleaned up.

This is a simple way to solve a common problem. There is a built in Messaging Center in Xamarin Forms that I personally find a bit messy to use.

Future features might be async actions and passing of simple data.

Available on nuget at https://www.nuget.org/packages/tinypubsub and GitHub at https://github.com/johankson/TinyPubSub
Johan Karlsson at 12:54 PM
Share